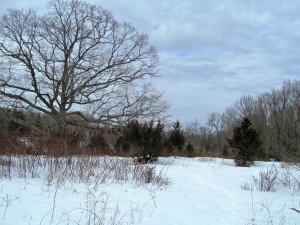 I’m deep into reading a biography by Linda Lear titled Rachel Carson, Witness for Nature. Carson’s most acclaimed book prior to Silent Spring was The Sea Around Us which I must admit I have never read. According to the biography, the night in 1952 when she accepted the Burroughs Medal for The Sea Around Us she said,

“Mankind has gone very far into an artificial world of his own creation. He has sought to insulate himself, in his cities of steel and concrete, from the realities of earth and water and the growing seed. Intoxicated with a sense of his own power, he seems to be going farther and farther into more experiments for the destruction of himself and his world.”

Although cohousing has existed for decades, I feel our Rocky Corner neighborhood is an experiment in turning around the destruction that often comes with new construction. Since the beginning of this project, and ongoing since then, “earth and water and growing seed” have been our focus.

Wonder if we could come up with creative ways to use this as our motto going forward. A song, a mural, a logo…Anyone?